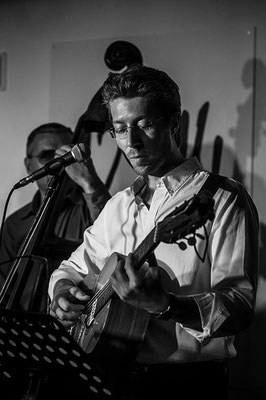 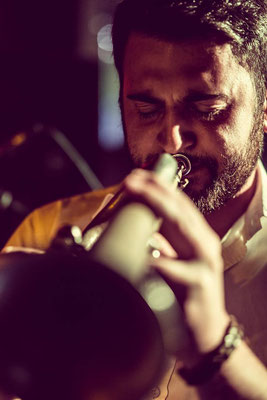 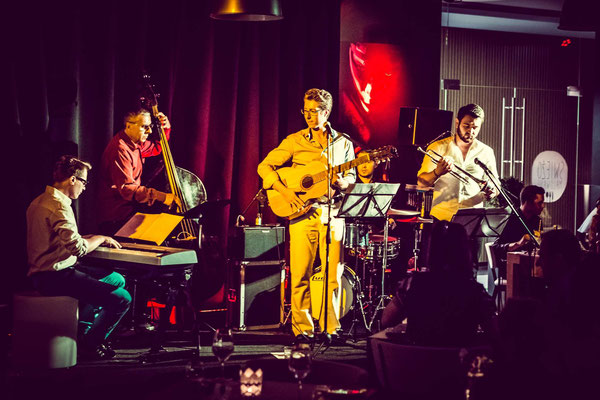 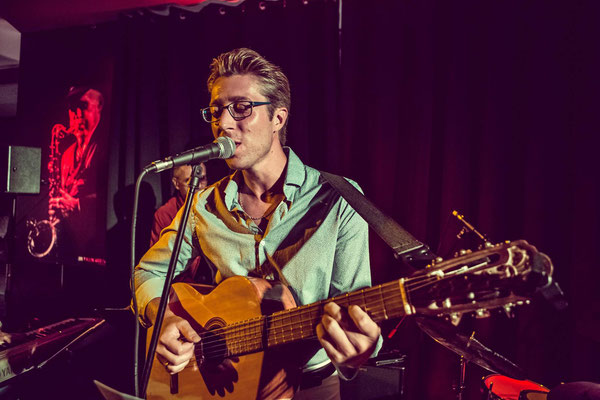 Ritmo Afinado is an Italian-Polish-Latin American musical merger, which is about intellect as much as sensuality and style. The musical link between Italy and Brazil, goes back of many years to Italian romantic songs similar melodically to the ancestors of samba.

By Tomasz Pierchala, managing director and owner of 12/14 Jazz Club Warsaw (PL), awarded as best Jazz Club in Poland in 2016

"Beautiful and sunny Italian songs, interpreted in jazz style by Ritmo Afinado, definitely won yesterday with Polish capricious weather, gathering a large audience in the fully sold-out 12/14 Club in Warsaw (PL). The unforgettable evening was graced by hot rhythms, great songs (such as the stunning "Ritmo e Parole" or the famous "Estate"), the stylish workmanship and excellent contact with the audience of the band leader Francesco Chiarini - the guitarist with a lyrical voice. Francesco Chiarini, the only Italian jazz musician living in Poland, created a memorable event and moved the languorous audience towards the wonderful Italian dolce vita. The performance of Ritmo Afinado was rewarded with thunderous and prolonged applause ending with encore."

Everything we need is Rhythm and Words. Rhythm of the waves. Rhythm of the heart, blood in the veins, the movement of your body. But there is more: Words. Words lost in time, flowing in the wind, Words becoming utterly useless compared to a glance. The name of your beloved one is a Word too.

Inspired by the desire of passion from the past years. By spending rewarding evenings together, moments that remained inside our hearts. Far in time. But now, these moments seem to be so nearby in our mind. Every moment of today is worth breathing life into it. In their original form: Rhythm & Words.

This project ensembles warm southern rhythms, with tendency to both an instrumental set and vocal poetry. Each note is born from an innate sense of spontaneity, which is the real key to accurate interpretation.

Francesco Chiarini is an experienced Italian guitarist and vocalist who performed hundred concerts in Italy and Poland. He plays guitars from the age of 7, under the wings of maestro Maurizio Pitacco from the School of Music in Piacenza (Italy). Among Francesco's most important live achievements of particular importance are: concert in the famous club Rolling Stone in Milan, multiple participation in the festival "Tendenze" in Piacenza (one of the biggest music events in the region of Emilia-Romagna), concerts on the exclusive Lake Garda riviera and on the beloved Adriatic sea.

Francesco lives in Warsaw for nine years, is the founder of the well-known band, "Francesco Bossa Quartet", which issued so far two albums (Estate and Dal Vivo dal Mare) appreciated by jazz experts, such as: Rafal Bryndal, Leonardo Masi, Yujiro Nakajima. With fellow musicians, presenting the audience Italian music in a unique arrangement of bossa nova and jazz, arousing media interest and great sympathy from the audience.

Full of rhythm professional musician, alumnus of the prestigious Universidad de la Musica G. Martell in Mexico City, he started playing clubs in Veracruz in the early 2000s. He played with Altavoz, Riddel Band and Koctail simultaneously working as a session drummer. Founder of Sweet Emotion. He continues his music career in Poland as a studio and live session player.

He graduated from the Music School in Warsaw in the piano class of Marcin Małecki.

From an early age, he is passionate about music, faithful to his principles for years. Producer, composer, arranger, pianist, hobbyist as well as bassist. He has been involved in electronic and club music for 20 years. Coordinator and music arranger in multimedia events.  He cooperated with, among others Krzesimir Dębski, Kamil Radzimowski, Marcin Czyżewski, Mili Morena y su Clave, Ray Ceballo, Magda Navarette, Noche De Boleros, The Stars Cover Band.

Professional graduated bass player from Stanisław Moniuszki in Łódź at the Instrumental Department in the guitar and double bass class.

He gave concerts and appeared on stages throughout Poland and abroad (Hungary, Cyprus, Italy, Germany) and appeared, among others, as an episode and recorded guitar parts as a musician in the film "IDA" by Paweł Pawlikowski.

Winner -amongst others- of the best bass player of the Widzewska Jesień Muzyczna festival.

Lucas as a universal musician finds himself perfectly in every musical style.  He performed as a double bass player in symphonic and string orchestras, bassist in the Łódź big band.  He played African, rock or pop music.

Enthusiast of gospel music, willingly invited by instructors from Great Britain to participate in gospel workshops taking place in Poland.

Guitarist and bassist in bands of recognized actors - Joanna Kulig and Artur Gotz.

Winner of several festivals, young talent, passionate about music from the first seconds of life. Damian cooperates with the best orchestras both in Poland and Germany. He has participated in many concerts of different kinds of music mainly under jazz influences. He has performed in the country and abroad with many leading Polish jazzmen.

A master of subtle sounds from instruments that we often do not know about. Udu, djembe, rain stick, congo and dozens of original sound production equipment: bells, shells, sticks and others are the magical world of Tomas music.

Born in Mexico, Thomas Celis Sanchez graduated from the double bass school of the Ciudad de México Music Academy. However, he pursues his musical career as a percussionist. He has lived in Cracow for nearly 20 years. He is an extremely valued sideman, and his genius is appreciated by the greatest musicians in Poland and abroad. He cooperated among others with Ewa Uryga, Krzysztof Ścierański, Anna Maria Jopek, Justyna Steczkowska, Ewa Bem, Olga Turkiewicz and Raz Two Trzy. He is invited to participate in the most important European jazz festivals. The Ingolstadt Jazz Tage, International Jazz & Blues Festival, Kikinda in Serbia. He gave concerts during the International Film Festival in Karlovy Vary and at the Polish Institute in Leipzig. In 2013 he performed twice at the Independence Concerto: at the Warsaw Uprising Museum and at the Royal Castle in Warsaw.